Sempach LU – Calopad, a start-up based in Sempach, has developed a reusable heat plaster to treat chronic pain. The product has been available on the market since March. Now, the company is already switching its focus to expanding the distribution network.

Calopad has developed a reusable, battery-powered heat plaster aimed at treating chronic pain. In contrast to heat ointments, which only stimulate a feeling of surface-level heat, the plaster achieves a therapeutic deep heat of 42 degrees. While other therapy devices can also achieve this, these usually require a power connection and are therefore not mobile solutions. Michael Breiter, founder of Calopad, also emphasizes in an article on startupticker.ch that the plaster can be worn concealed under clothing.

Following a four-year development phase, the heat plaster was launched on the market in March, startupticker.ch writes. At present, customers are able to order the product from the online shop. However, it will soon also be available in drugstores and pharmacies. The start-up based in Sempach in the canton of Lucerne is also looking to expand its distribution network with the inclusion of therapy centers, resellers and partners. The medium-term goal is to expand sales across the entire German-speaking region.

According to the article, Calopad has recorded a sharp rise in demand since March. “At the moment, we are producing the next 2,000 units, which will be available by mid-May 2021”, Breiter comments. 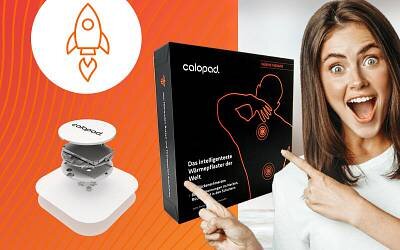